This Friday (June 23) the Red Sox are retiring David Ortiz’s jersey number 34, ceremoniously displaying it on the right field facade for the ages.  The current Red Sox ownership does history well — there are now 10 numbers permanently out of circulation (plus Jackie Robinson’s 42, retired by all of baseball), even as fans clamor for more honorees.

As an illustration of how things have changed, the Red Sox first retired numbers in 1984, when they retired two at once: for Ted Williams and Joe Cronin.  I was there that night, part of a small crowd who showed up mainly to see Williams.  Twenty-five years later I wrote a book about Cronin, and the story of that evening became the Prolog for my book.

I reprint the Prolog here.

[Excerpted with permission from Joe Cronin: A Life in Baseball (Nebraska, 2010).]

Tuesday, May 29, 1984 was a damp and miserable night at Fenway Park. The Boston Red Sox were playing host to the Minnesota Twins, and it was Jimmy Fund night, an annual affair from which the Red Sox donated all net proceeds to the team’s long-time charity. Making the event historical, the Red Sox planned a pre-game celebration to retire the uniform numbers of Ted Williams (9) and Joe Cronin (4), the first players they had ever so honored. Only 15,472 tickets were sold, however, and fewer than 10,000 fans braved the conditions to head to the park for a game that might not be played. In the Boston Globe the next day, Peter Gammons referred to the dismal crowd as “the bittersweet part of the occasion,” and reflective of “the state of the franchise’s current interest.”[i] Though the season was just eight weeks old, the club was already 17 games out of first place.

The Red Sox decision to retire the two numbers, announced the previous November, had been met with some confusion. No one had worn Williams’ number since his dramatic home run 24 years earlier in the final at bat of his storied career, and most fans believed that his number had already been retired. In fact, the club had never held a ceremony, made a public pronouncement, or recognized the number anywhere in the park. They had just never let anyone else wear it. As for Cronin’s #4, it had been worn regularly in the 37 years since Cronin took it off in 1947, most recently by Carney Lansford in 1982. Few fans would have known what number Cronin had worn.

John Harrington, a team consultant and future CEO, had pushed for this night. He had lobbied Haywood Sullivan and Jean Yawkey, the team’s two principal owners, both of whom were initially reluctant. Once you start retiring numbers, they felt, when does it stop? To combat this argument, Harrington set out to develop a strict set of criteria, for which he enlisted Dick Bresciani, the club’s public relations director and historian. The two men came up with three: membership in baseball’s Hall of Fame, ten or more years playing for the Red Sox, including the last five of their playing career. When Harrington presented his proposal to Yawkey and Sullivan, he told them that only two men qualified for the honor: Cronin and Williams.[ii]

The decision to retire the numbers was made in the fall of 1983, and a formal event was planned for the following spring. Had the event been for Williams alone, it might never have come off–he was generally uninterested in ceremonies or honors, especially when they involved him. Convincing Williams to give up a few days of fishing would not have been easy. But the main impetus for the evening was not to honor Ted Williams, who had been honored plenty; it was to recognize Joe Cronin. Cronin was very ill, confined to a wheelchair, and suffering from cancer that would take his life less than four months later. For Cronin, a beloved former teammate, manager, and general manager, Williams enthusiastically signed on. He would be there. The night would go on. 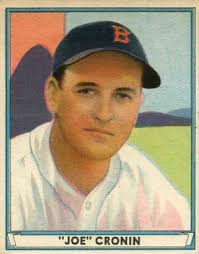 Williams and Cronin made for an interesting pairing. They had very little in common within baseball or outside it. Williams joined the major leagues as an extraordinary once-in-a-generation talent, but spent his entire career battling bouts of rage and immaturity. No one ever accused Joe Cronin of being immature–he behaved like a 10-year veteran when he broke in and was managing a major league team at age 26. Cronin was a family man, a devoted churchgoer, a gentleman who wore suits and watched his language in front of women. Williams was none of those things, and never would be. Williams was a rebel. Joe Cronin did not have a rebellious bone in his body.

Cronin loved nothing more than being around baseball people, attending baseball games and functions, and talking with the press. Williams was a student of the game, and could talk for hours if you wanted to talk about hitting, but he spent very little time with baseball people unless he had to, and feuded with the press his entire career. When the season was over, Williams would practically disappear until spring training, off fishing somewhere. Cronin’s off-season was a whirlwind of meetings, baseball dinners, and socializing. When he became general manager of the Red Sox he instituted a weekly press briefing–there was rarely news, but it gave him an excuse to talk baseball. 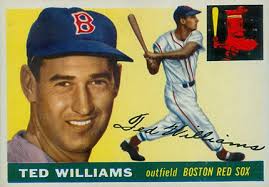 Though very different men, Cronin and Williams grew to respect and love each other. Williams later admitted wishing he’d had some of what Cronin had–the family life, the friends, the peace and happiness. It is not hard to imagine Cronin wistfully admiring Williams’ rebelliousness, wondering what it would be like to discard the tie before dinner, to fling the bat, to yell at the crowd that booed him. What the two had in common–a love of baseball, of their teammates and fellow players, and extreme personal generosity–would sustain them through Williams’ many rough patches.

The big night still almost did not come to pass. Cronin lived an hour and a half from Boston, in Osterville on Cape Cod, and resisted making the trip almost to the minute he had to leave. Cronin dearly wanted to see all of his old friends, but not in his deteriorating condition. Finally, the day before the event, he and his wife Mildred were driven by a neighbor, Laura O’Neill, to the Park Plaza Hotel in Copley Place. When he arrived, he was greeted by several members of the Twins’ front office. Cronin had requested the night involve the Twins, for the club’s two principal owners–Calvin Griffith and Thelma Haynes–were Mildred’s brother and sister, and many other family members worked for the team. The Cronin’s oldest son, Tommy, worked in sales, and was in Boston for the big event. “The next morning,” Mildred later related, “that darling Ted Williams came up to the hotel room, and Ted and Joe spent two hours talking about old times.”[iii]

That evening, the Cronin entourage all made it to the park in time for the 7:30 ceremony. Though he badly wanted to, Cronin decided at the last minute that he could not go out on the field, instead sitting with Mildred in a luxury box above the third base stands. On the field below them sat a ring of dignitaries, including commissioner Bowie Kuhn, American League president Bobby Brown and his predecessor Lee MacPhail, Sullivan, Yawkey, and former teammates Johnny Pesky and Bobby Doerr. Representing Cronin were his four children and several grandchildren, some of whom were running around second base. Williams had three children during his three marriages, but on this night was joined only by John Henry, a 15-year-old son he hardly knew.

Mrs. Yawkey, whose late husband had purchased Cronin for a record setting price 40 years earlier, spoke briefly, saying: “Joe, Ted, we of the Red Sox organization always loved you as do the fans of New England. We will always love you because you are the Red Sox.” Both men received the Thomas A. Yawkey Award for their many years of support to the Jimmy Fund. In presenting the award to Williams, Pesky also spoke to his old manager: “Joe, thank you for letting me play. Those were great years.” Doerr presented Cronin’s award to his daughter Maureen, while thanking Joe for “giving me a look in 1937 for the Red Sox.” When Cronin’s name was announced the organist played the Disney song “When You Wish upon a Star,” a favorite of his.[iv]

But the person everyone wanted to hear, as always, was Williams, and the great slugger devoted most of his remarks to his fellow honoree. “One of the best things about playing in Boston,” Williams told the crowd, “was I got to play for manager Joe Cronin. You don’t realize what an impact he had on me. I have great respect for a very, very wonderful man. Joe Cronin was a great player, manager, and wonderful father and nobody respects you more than me.” Visibly emotional as he gestured to Cronin in his box above, he added, “In my eyes you’re a great man.” Cronin returned the wave, equally moved. Finally, the Red Sox unveiled the two huge numbers, in their classic Red Sox font, on the right field façade below the ever-present Jimmy Fund billboard.

The ceremony delayed the start of the baseball game until 8:30. At the end of four innings the Twins had built a 5-0 lead, the Red Sox managing just one hit and eight strikeouts against Frank Viola. When the Red Sox took the field in the top of the fifth, the rains that had pelted the city all day and washed out batting practice came back with a vengeance. After a delay of an hour and 41 minutes, the umpires called the game, wiping out the Twins likely victory. Cronin and Williams, whose ceremony had delayed the game, had helped the club one final time.

“Joe to me was the main concern,” related Williams during the rain delay. “Talking with Joe and seeing him smile made the night. I’ve talked to him on the phone and the greatest thing that could happen to him now is to hear from old ballplayers or get out to see a game like he did tonight.”[v] Williams and Cronin would speak on the phone regularly the rest of the summer, but would never see each other again.

After the ceremony, Cronin was helped to the press room, where he had spent so much time in the previous 50 years. He had a message to deliver to the fans: he had so wanted to be down on that field one more time, to tell the fans how he much he loved them, and to return the complements Williams had paid. But his body simply could not do it. “It was too tough,” he said. Cronin also denied any difficulties dealing with Williams: “He was perfect. He never missed a bus, never missed batting practice, never missed anything. He never griped either.”[vi]

The old shortstop glowed that night. His friends and family still recall how happy he was, seeing old friends, being at Fenway Park. He told his children how appreciative he was that the Red Sox had gone through so much trouble for him, long past his contributions to the club had ended. They had honored him with on-field ceremonies twice before: in 1938, to recognize his excellence as a player and manager (he received a silver service, and an Irish Terrier that he named Red Sox), and in 1956, to celebrate his induction into baseball’s Hall of Fame. This time was better. Williams was right: Cronin needed this night, needed to be around baseball, the game that had meant everything to him for nearly all of his 77 years.