Note: This article was originally published at TheNationalPastimeMuseum.com on June 9, 2016 and is reprinted here by permission. 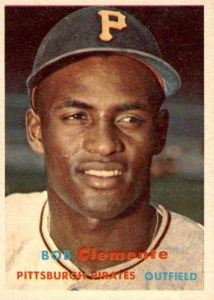 Way back at the beginning of this series I boldly proclaimed that before I wrapped up I was going to crown the best card set of Topps’ monopoly years, and I have not yet done that. Before I do, I wanted to pass along a few points you should consider before you inevitably disagree with me.

If you have read the previous articles of this series, you already know some of the things I value about cards. I kept (and still keep) my cards loose (not in albums), sorted them by team, and used them to learn about players and organize lineups and pitching staffs. So the back of the card is important—not only the content, but also the readability. I did not like cards that were airbrushed—I would prefer the player be shown with his former team rather than Topps’ attempt to draw a fake hat or (even worse) uniform.

I liked a card front that drew your eyes to the color photo, and not to the border, and I liked the team name to be large and color-coded. I liked some subsets (All-Star cards, World Series cards, multiplayer cards) more than others (boyhood photos, team cards, season highlights).

I wanted Topps to change their designs every year, to try new things, understanding that some of the innovations would not take. Importantly, I reserve the right to like changes that break some of the rules above. As Justice Potter Stewart might have said, I can’t tell you what a great baseball card is, but I know it when I see it.

Unfortunately, I decided I needed to apply a bit of objectivity to the process, and I simply could not ignore that 37 percent of the 1969 base cards were either hatless or had an airbrushed hat, and that several dozen photos were recycled from the previous year or earlier. If this set was allowed to simply submit its best 50 samples, it very well might have won. But when you look at the entire body of work, as much as it hurts me, I can’t get there.

In 1963, Topps switched to the white card stock that they used for eight years. The card back was basically perfect, but I did knock the set down a few notches for the blurry, black and white secondary photo they put on the front of the base cards (not shown on this multiplayer card). Topps had a great group of subsets in this era but were using floating heads on their leader and rookie cards, which also hurts their final ranking. 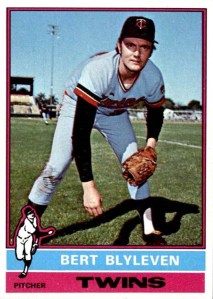 This is a difficult ranking to settle on, since Topps matched a fantastic card front with a dull and hard-to-read card back. I finally decided that if I maintained my strict standards for the back I would be left with nothing from the 1970s. 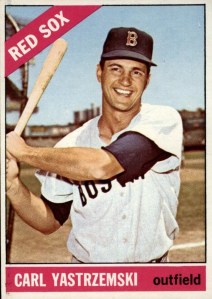 Besides being the golden age for card backs, this was also the golden age for crisp color photography. By the early 1970s, Topps was switching to more action shots and also more candid still shots (the player might be just chilling near the dugout, looking askance). In 1966, there were a lot of beautiful posed shots under clear blue skies.

Over his long career Carl Yastrzemski was featured on 24 Topps base cards (1960 to 1983) and several other leader and All-Star cards. I am fairly sure that this is the only time the photographer ever caught him smiling. 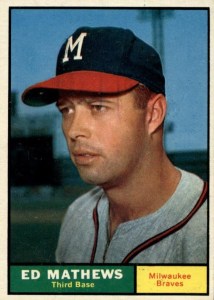 After a few years of experimentation, Topps put out a card with the photograph as the dominant element. The set is hurt by the new expansion teams and all of their hatless photos, but there are some fine subsets included. Many of the head-shot portraits—like Luis Aparicio, Al Kaline, and Mickey Mantle—are simply gorgeous photos.

This was the last of the larger-sized cards that Topps introduced in 1952. I might dock them a bit for only having one year worth of statistics, which is perhaps unfair—Topps did not invent the multiyear card back until 1957. The backs are actually wonderful. Baseball cards, at bottom, should be made to appeal to kids, and these are great on that score. 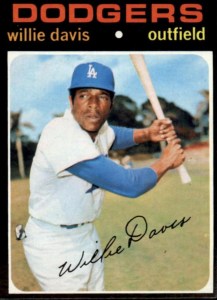 This is a difficult and very personal ranking. There might not be a card set that I most enjoy looking at, and I think the card fronts are perfect—Topps’ pinnacle. The backs, as I have explained, are not, and card backs are generally very important to me. Ultimately, I decided to go with my heart.

If you had asked me a year ago, or five years ago, or anytime in the past 20 years, about my favorite card sets I doubt this one would have been mentioned. It was before my time, and I had gradually put a set together without the enthusiasm I had for other years. But the past few months have not been all fun and games—I have been studying these sets, comparing the backs, comparing all of the various subsets, determining how many cards are altered or hatless. I just tried to use as much objective criteria as I could. The more I did this, the more this set kept coming up roses, and I kept looking at them and thumbing through my stacks, and finally I decided that it was a pretty awesome effort by the folks at Topps Chewing Gum, Inc.

I know a lot of people don’t appreciate the grey border, especially when compared with what came along the next two years. Me, I love it without reservation. And I also consider this a major return to normalcy for Topps after all the problems they had with uniforms and players over the previous two years. If you judge a set by how many superstars had great cards, the 1970 set earns this high grade.

For the first time, Topps used color photography on the front of the card, and they took advantage of this by having the photo stretch nearly from corner to corner. Beautiful cards throughout were made especially great by the wonderful backdrops of Yankee Stadium and Ebbets Field. This could easily be No. 1. My complete sets only go back to 1964, and there is no set I would more like to own than this one.

If you read this series from the beginning you might remember that these were the first cards I ever bought. Therefore, you might be thinking, my selection of this set at No. 1 is just pure nostalgia, in a “I got to see all the cool bands” sort of way. In my defense, I was just six years old and did not even collect half of the cards that summer. If I had chosen to put the thumb on the scale it would have been for 1969, which I collected all summer long and has a big pull on me to this day.

I could give a lot of reasons why this set deserves its ranking, though it is undeniable that many of what I consider “tastes” could have been set in place that summer. I have always preferred sets with the team name as the dominant element, a colorful easy-to-read back, cartoons, poses where I can see and learn the player’s face. If I had begun collecting in 1972, I might have grown up preferring gauche borders, wide camera shots, blurry images with faces obscured by shadowing. But I didn’t, so here we are.

Someday I will likely have to start making a plan to divest myself of my old cards. When I do, this will be the last set to go.

The closest thing I ever had to a “hang out” location, like the bar in Cheers or the barbershop in the Andy Griffith Show, was a baseball card shop in Reading, Massachusetts, called “Bill’s Place.” Most every Saturday morning for a few years around 1990 I would get up, do a few chores around the house, and then head to Bill’s for a few hours of baseball talk with Bill and a few other regulars. Bill was a generation older than me, but a friend to all who walked in. This was the absolute peak of the national card craze, but Bill avoided both the frenzy and the crash. He stocked newer cards to get people into the store, but most of his customers were old loyalists who wanted to talk about Jackie Jensen while they rifled through old card boxes. Sometimes I bought a few things, sometimes I didn’t.

Sometime in early 1992 I decided that I had too many baseball cards. There were several new sets coming out every year by this point, and the whole thing was getting exhausting. I worked out a deal with Bill: I gave him all of my post-1980 sets (about 40 in all, more than 25,000 cards) and he gave me $2,000 in store credit. In my subsequent shopping spree, I selected 15 cards, including beautiful 1957s of Mickey Mantle, Willie Mays, and Ted Williams.

As a baseball card collector, I had retired from the mania and speculation and chase cards and gimmicks and 10 sets per year. Instead, I had cast my lot with an earlier age, when Topps created 600 cards a year for school kids to trade on the playground.

I still buy baseball cards now and then, but they arrive in the mail one or two at a time. It’s not what it was—I no longer have the excitement of opening a wax pack and seeing cards I have never laid eyes on before.

But once in a while I can take down my 1970 set, look over my stacks for the Orioles and Reds, and remember the lineups they used in that year’s World Series. And suddenly I am back in fifth grade, without a care in the world.

Thank you to The Topps Company for granting us permission to use images of their cards in this series.