Note: This article was originally published at TheNationalPastimeMuseum.com on June 2, 2016 and is reprinted here by permission. 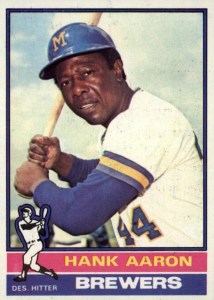 Although Fleer had failed its legal challenges to Topps in the 1960s it continued to keep its hands in the baseball memorabilia game, selling team stickers or cards honoring past World Series with bubblegum in the late 1960s and early 1970s. In 1975 Fleer asked Topps permission to market stickers or stamps of current players. When Topps refused, Fleer filed suit against both Topps and the Players Association to try to break the monopoly. In its suit, Fleer claimed that it could not compete in the bubblegum market without the ability to include baseball cards with its product.

The litigation took several years to play out, but in 1980 a federal court found for Fleer, ordering the players union to issue at least one additional group license for 1981. In the event, both Fleer and Donruss, another gum company, joined Topps in 1981, helping to usher in an explosion in card sets, and card popularity, that lasted a bit more than a decade. An appeals court overturned Fleer’s victory late in 1981, but the two upstarts simply replaced their gum with stickers or puzzle pieces, and the monopoly was finished.

I am getting a bit ahead of my story here, but by 1990 there were five major card companies and a dozen card sets being put out every year. Instead of kids riding their bike to the store with a quarter and riding home with 25 cards, monied adults were buying cases filled with tens of thousands of cards and putting them in their basement to save for their retirement. There were sports card stores in every strip mall and price guides in every bookstore. Kids were no longer “playing” with their cards; they were putting them in albums or in hard plastic cases. As the cards had no more intrinsic value than they had when they were being sold for a penny, the crash of the baseball card bubble in the early 1990s seemed inevitable.

But that is not our story. When we left off last time, the Topps monopoly still had five more years to run. 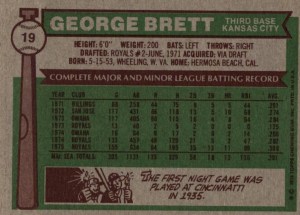 In the spring of 1976 I sent a check off to Renata Galasso, a New York hobby dealer who advertised in the baseball magazines of the period. I recall that I paid about $15, plus postage, and she returned to me a complete set of 1976 Topps baseball cards. I believe I bought a few packs of cards in the spring just out of habit, but for the most part I had finally chosen the simpler (and less expensive) option. A downside is that I had no doubles (extra copies of cards), but I knew no other 15-year-old baseball card collectors to trade with anyway. Trying to complete a card set by buying card packs all summer is, all things considered, an insane endeavor.

I have heard it said that even people who collected cards in this period have a hard time telling the card sets apart starting about 1976. Personally, I quite like the 1976 front design—a nice clean card with the photo extending nearly from corner to corner other than the position silhouette and name/team graphic at the bottom. The backs of the cards were informative if you had great lighting. (I am going to stop complaining about the dark card stock, a Topps staple for 20 years.) Topps uses a cartoon on the back, but it highlights a random piece of baseball trivia, unrelated to this particular player.

One of the great things about the 1976 cards for us Red Sox fans was seeing the first cards of Jim Rice and Fred Lynn. Collectors today are doubtless protesting, “Hold on there. They both had Rookie Cards in 1975!” But again, I cannot stress enough how lame those four-person cards were for someone who used his cards the way I did. The 1976 Lynn and Rice cards were real cards, with real photos and backs. To me, those will always be their first cards. The rest of you can believe what you want.

In one of the 1976 subsets, Topps produced cards for an all-time All-Star team. There were two pitchers, making a total of 10 cards. All but one of the players played before World War II—Lou Gehrig, Rogers Hornsby, Pie Traynor, Honus Wagner, Ted Williams, Ty Cobb, Babe Ruth, Mickey Cochrane, Walter Johnson, and Lefty Grove. The selections were fairly standard for the time; Sabermetrics had not yet downgraded Traynor, and casual histories (then and now) rarely recognize more recent greatness. 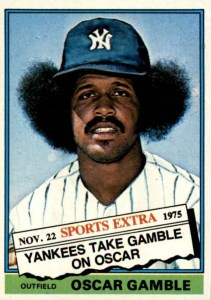 Topps also put out a Traded subset, as they had in 1974, putting the 44 cards in packs starting in midsummer. Since I had already bought my set, I did not get around to acquiring these cards until years later. Like the 1974 Traded cards, all are airbrushed, and some of them (like the Oscar Gamble) show up in articles that mock old Topps cards. As someone who loves old Topps cards, I am less amused

By the time these cards came along I was 16 years old, finishing my junior year of high school, and my card collecting was something I kept on the side of my life, something I paid attention to when I had nothing else to do. My social life was not exactly thriving, and my high school peers knew me as someone who followed sports of all kinds. I was, for example, the “smart” kid who nearly overslept the SATs because I was up late watching a West Coast NBA playoff game. But as much as I might be a go-to guy for conversations about the Red Sox or Bruins, it’s not like I was bringing my baseball cards into school to show my friends. I wasn’t “hiding” anything, but they had become something like nostalgia for my fading youth.

The 1977 cards again used a white border and a color-coded team graphic. The design seemed a little less elegant than the previous year for some reason, and the backs again used the green-grey pattern with a cartoon for a baseball fact unrelated to the player. Topps had two more expansion teams to deal with, giving their airbrush artists more work to do and the rest of us some cringe-worthy cards to deal with. 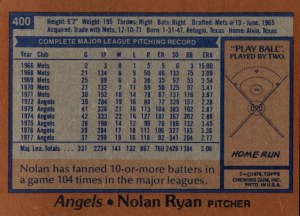 Topps put out another white-border special in 1978, though they made the design cleaner and the photo larger than the previous year. And the back, despite the grey card stock, may have been Topps’ best since 1970. I do not remember too much about collecting these cards—perhaps I was too busy graduating from high school and being the most popular kid in my hometown or something.

In recent articles I have mentioned my fondness for the All-Star subset Topps used from 1958 to 1962 and again from 1968 to 1970. These teams were not related to the annual All-Star Game—they were Topps’ choices (or the choices of The Sporting News in some seasons) looking ahead to the season. Topps never went completely back to the full subset, but they did designate players as All Stars in some years. In 1974, they had a smaller subset that put two players on a card (for example, Joe Morgan and Rod Carew as the two All-Star second basemen). Starting the next year they put the All-Star designation on the player’s base card, a feature of the Topps set for the next several years.

Rod Carew was designated an All Star in each of these seven seasons (1974–80), while Johnny Bench and Joe Morgan were so named six times. Carew had also been named in 1968 through 1970 and likely would have been in the intervening years had Topps not dropped the habit for a few years.

The first time I ever entered a card store was the summer of 1979 in the neighborhood outside Fenway Park. By this time I was no longer particularly passionate about the latest card series put out by Topps, but I was increasingly interested in my childhood collection. A decade earlier there were still ads in The Sporting News inviting you to buy baseball cards from older Topps sets for three cents apiece. Any card. You want a 1961 Mickey Mantle? OK, but its going to cost you three cents, plus postage, and there might be a 10-card minimum. You might have to pay three cents for Willie Mays too.

By the mid-1970s, there were hobby magazines, a few card shows around the country, and dealers trying to BUY your cards. The good news is that I could buy some of the cards I had never been able to acquire back in my misspent youth. The bad news is that the cards were no longer three cents. 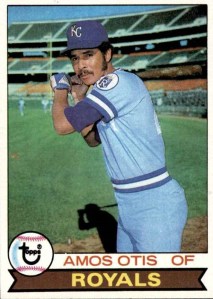 The 1979 Topps set seemed to fit in with all of the other Topps sets of the era—a white border with a new variation on the three constant design elements (name, team, position). The addition of the Topps name to the front could have been a harbinger of the coming end to their primacy in the hobby. 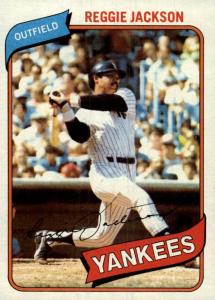 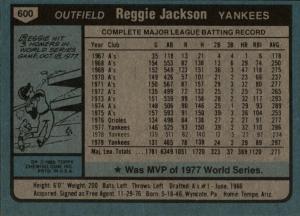 Topps’ final card issue of the era is another white-bordered, grey-backed special, and there is little to add at this point beyond the images. One decided improvement is that the cartoon on the back related to the player on the front, as opposed to just a piece of baseball trivia. 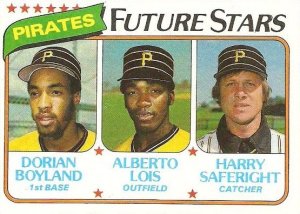 I mentioned earlier that I always appreciated the multiplayer Rookie Stars subset, especially starting after Topps went away from the “floating heads.” In 1973 Topps decided to stop putting out one or two cards for each team (“Red Sox Rookie Stars”) and instead group the players by position (“Rookie Outfielders”). They also dramatically reduced the number of such cards. As someone that always kept his cards sorted by team, this posed a problem. I basically had to put the cards in their own separate stack. Topps reversed this decision in 1979 and put out exactly one such card per team (with three players per card). In 1980 Topps boldly referred to the players as “Future Stars,” a stature not all of them would merit.

Thank you to The Topps Company for granting me permission to use images of their cards in this series.

Next week: I wrap up the series with a look back at the 10 greatest card sets of the great Topps monopoly.