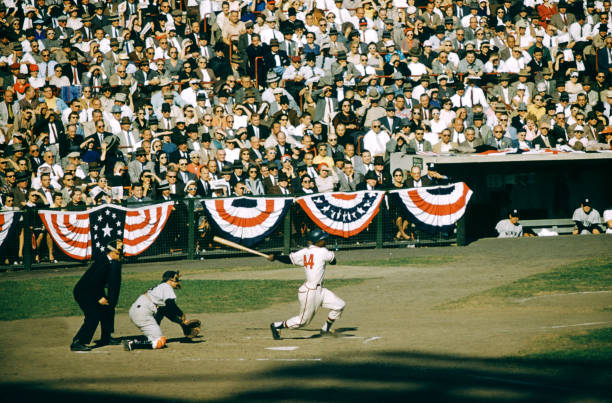 Note: This article was originally published at TheNationalPastimeMuseum.com in October 2017 and is reprinted here by permission.

As the 1957 baseball season dawned, baseball fans in New York City could be forgiven if they had taken to think of the World Series as their very own event. In the recent decade (1947-56), there had been 58 World Series games played, and 48 of them had taken place in New York, including 36 of the past 38. Think about that.

Growing up in the 1970s, I was fed stories and books about this Golden Age, generally from adults or writers who had grown up in New York in this period and considered this the game’s zenith, the best time to grow up, to love the game, a team, a city, a neighborhood. And maybe it was. For them. If you grew up in Pittsburgh or Boston, maybe you’d have a different take.

If 1957 marked the end of the Golden Age for New York baseball, the final year of their three-team hegemony, one could argue that it marked the beginning for the rest of the country.

After baseball spent five decades with 16 teams in the same 11 cities, the Boston Braves broke the logjam with their move to Milwaukee in 1953. For their first six years in Wisconsin, the Braves had the highest attendance in the major leagues, until they were finally topped by another transplant – the Los Angeles Dodgers.

The Braves, coincidentally or not, also became a very good team immediately upon landing in Milwaukee. The final Boston Braves team (1952) featured Warren Spahn, a couple of promising youngsters in Eddie Mathews and Lou Burdette, and a lot of veterans on their way out. Their 64 wins were 32 fewer than the Dodgers.

In 1953, Spahn (23-7, 2.10) and Mathews (47 homers) took big steps forward in their new homes, while youngsters Bob Buhl and Joe Adcock joined a suddenly young core. The Milwaukee Braves vaulted all the way to 92 wins, and finished second.

The next year they added Henry Aaron. That went well. The National League of the 1950s was loaded, as every team seemed to have a superstars or two. In 1956 the Braves lost the pennant on the final weekend of the season to the last great Brooklyn Dodgers team.

The 1957 Braves won the National League rather easily, winning 95 games to outpace the Cardinals by 8. Three superstars – Henry Aaron (44 homers, 166 OPS+), Eddie Mathews (32 homers, 154 OPS+), and Warren Spahn (21-11, 2.69) – led the way, all having their typical season. The Braves had two other good starters (Lou Burdette and Bob Buhl). Aaron and Mathews were most of the offense – no other Brave scored or drove in 70 runs – but manager Fred Haney cobbled together a few platoons and employed a deep bench.

The Braves opponent in the World Series, surprising no one, was the Yankees. The American League was filled with weaklings and sad sacks for the entire decade of the 1950s, and only a great year from the Indians in 1954 and a fluky 1959 Yankees off-year (allowing the White Sox to sneak in) kept the Yankees from winning 16 pennants in a row (1949-1964). The 1957 club won 98 games and took the pennant by eight.

The Yankees won the pennant every year by having better players than everyone else. In 1957, this included the league’s best player (Mickey Mantle, who hit .365 with a 221 OPS+), three-time MVP Yogi Berra (24 homers), underrated star Gil McDougald (120 OPS+ and great shortstop defense), and a large cast (Bill Skowron, Hank Bauer, Tony Kubek) of solid contributors. Whitey Ford missed several weeks with a sore shoulder, but manager Casey Stengel always managed to find a handful of people to give him 20-30 solid starts. In 1957, he got this out of Tom Sturdivant, Bob Turley, Johnny Kucks, Don Larsen and Bobby Shantz, who were plenty good enough to win another pennant.

With the middle three games scheduled for Milwaukee, the series included off days after Games 2 and 5. This seems perfectly normal to the modern fan, but this schedule had not yet become standard practice. In the previous 10 World Series (6 of which were New York affairs), there were no scheduled off days. (Weather problems created off days in 1951 and 1956). But in 1957 these off-days would allow the Braves to use just three starters, with Spahn ready to start three times, and mitigate the Yankees pitching depth advantage. The schedule had no effect on Stengel, who used five different starters in the World Series in 1955 and 1956, and would again this year.

In Game 1, a Wednesday afternoon at Yankee Stadium, Ford outdueled Spahn 3-1 in a battle of aces. The Yankees, per habit, pecked away at Spahn relentlessly before breaking through on Bauer’s RBI double in the fifth and Andy Carey’s run-scoring single in the 6th. That chased the Braves’ best pitcher, and Ford had the runs he needed, finishing with an impressive five-hitter.

Perhaps reacting to Ford’s gem in Game 1, Stengel went with Shantz, his other lefty, in Game 2. This time the Braves scored four runs in the first four innings, highlighted by a long Aaron triple in the second and Johnny Logan home run in the third. Burdette allowed seven hits and three walks, but went the distance for a 4-2 victory to knot the series.

The scheduled off-day, Friday October 4, is more famous today for the Soviet Union’s launch of the Sputnik satellite. After a day for America to lick their wounds, the World Series came to Milwaukee for the first time on Saturday. Unfortunately for the home crowd, the real Bronx Bombers showed up. Tony Kubek, the second batter of the game, got things started by homering off Bob Buhl, Mantle homered in the fourth, and Kubek capped the scoring with another homer, a three-run blast, in the seventh. The Braves knocked Turley out with three hits and four walks in the first two innings, but all that just amounted to one run. The final was 12-3, and the Yankees had a 2-1 series lead.

Spahn was back on the hill for Game 4, this time facing Tom Sturdivant. Casey Stengel never shortened his pitching staff in the post-season – he gave his pitchers at least four days of rest in the regular season, and gave them the same in October, Whitey Ford included.

The Braves got to Sturdivant with four runs in the fourth, all of it coming on a three-run homer by Aaron and a solo shot from Frank Torre. This looked to be plenty for the great Spahn, who entered the ninth with a six-hitter and a 4-1 lead.

After retiring Bauer and Mantle, needing just one more out, Spahn was touched with singles to Berra and McDougald and then a stunning three-run home run from Elston Howard to tie the game. Just like that. Things got worse in the tenth, when the Yankees moved in a front when Bauer singled in Kubek, who had tripled.

Now the Yankees were three outs from a 3-1 series lead.

In the bottom of the tenth, Haney called on Nippy Jones to pinch-hit for Spahn against Tommy Byrne. The first pitch was a curveball and inside which past Berra to the backstop. Umpire Augie Donatelli called it a ball, but Jones retrieved the ball and showed it Donatelli, who found shoe polish and agreed that it had struck Jones’ foot. A few minutes later a run-scoring double from Logan tied the game, and a walk-off two-run homer from Mathews off Bob Grim sent the happy Braves to their dressing room. The Series was tied again.

Game 5 matched Burdette, the star of Game 2, against a well-rested Ford, the star of Game 1. Ford was once again brilliant, allowing just six singles over his seven innings, with a lone run coming when the Braves managed three of them in a row in the sixth – Mathews, Aaron, and Adcock. This proved the only run of the game, as Yankees poorly spaced their seven singles — in seven different innings. Burdette did not allow a walk in his brilliant 1-0 shutout.

The series returned to New York with the Braves needing to win one of two.

The Braves sent Bob Buhl out again for Game 6, and he struggled for the second time in the series. He wriggled out of trouble in the first and second, but finally allowed a two-run homer to Berra in the third. There were three more solo home runs in the game, two by the Braves (Torre and Aaron), but a final decisive one from Bauer in the 7th. Bob Turley went the distance in the 3-2 victory, setting up a winner-take-all Game 7.

The Braves were delivered a big blow when Warren Spahn came down with the flu and was unable to pitch. Having committed himself to three starters, Haney handed the ball to Burdette, who had shut out the Yankees three days earlier. The Yankees countered with Larsen, who had won Game 3 with 7 1/3 innings of great relief, and, of course, had thrown a perfect game in the Series the year before.

Remarkably, Burdette threw another seven-hitter, and another shutout, and the Braves four-run third inning was plenty of offense in a relatively easy 5-0 win. The Yankees only real rally came in the ninth inning, when their three singles were still not enough to get a run across. Burdette finished with three complete games wins, allowing just two runs.

The Milwaukee Braves, just five years after leaving Boston as a poor down-trodden ballclub, were the most popular team in America (with attendance figures to prove), and the best. After eight years, the championship belt finally left the city of New York, and traveled all the way to Milwaukee, Wisconsin.