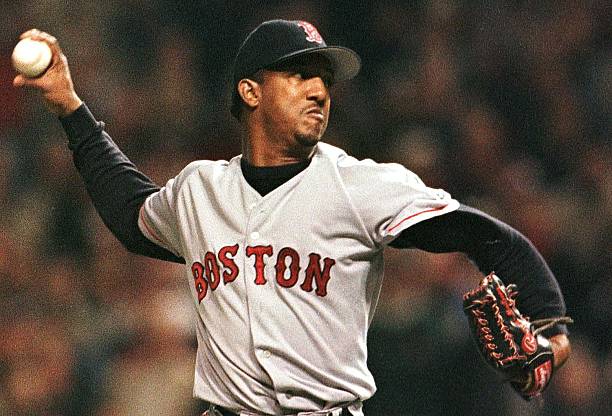 Note: This article was originally published at TheNationalPastimeMuseum.com in October 2017 and is reprinted here by permission.

Although it seems like baseball’s Division Series round began just a few years ago, we have already had 88 of them. How many do you remember? Many baseball fans can tell you who played in the 2002 World Series (or the 1952 World Series), but remembering the four 2002 Division Series might be a more challenging task. It’s like knowing the history of the NCAA basketball regional finals.

That said, those 88 series have involved many memorable games and performances. The one we will be remembering today took place on October 11, 1999 at Cleveland’s Jacobs Field, and pitted the Red Sox and Indians in the rubber match of a five game series.

The 1999 Cleveland Indians featured one of the greatest offenses of all time. Featuring such talents as Roberto Alomar, Manny Ramirez, Jim Thome, Kenny Lofton, David Justice, and Harold Baines, the team scored 1009 runs, the only team since 1950 to top 1000. Their pitchers were comparably serviceable, but how good did they have to be?

The Red Sox, on the other hand, featured two top-flight stars — pitcher Pedro Martinez and shortstop Nomar Garciaparra — and a group of veteran reclamation projects and young hopefuls. The team finished 9th in the league in runs scored, an unusual showing for a Red Sox team, especially one in the post-season.   But the team’s league best ERA was nearly all Pedro – in fact, he was the only pitcher to qualify for the ERA title.

Although Martinez had a marvelous career, filled with dozens of awe-inspiring performances, he was never more marvelous than he was during the 1999 and 2000 seasons, when batter after batter was reduced to a head-shaking prop on SportsCenter. The numbers – 41-10 with a 1.90 ERA and 597 strikeouts in 430 innings – are ridiculous even before considering Fenway Park and the inflated offenses of the period.

Watching Pedro’s undersized frame break off 125 pitches a game, be they 98 mph fastballs, knee-buckling curves, or head-shaking changeups, was both exhilarating and terrifying for Red Sox fans, in those pre-2004 “When is the other shoe going to drop?” days. As great as he was, he couldn’t possibly hold up, could he? He actually missed chunks of both seasons, managing only 29 (mainly incredible) starts in each year. His Mona Lisa might have been a 17-strikeout one-hitter in Yankee Stadium on September 10, 1999. But there are many candidates.

Somehow the 1999 Red Sox won 94 games, finished four games behind the Yankees, and nabbed the AL Wild Card spot and a date with the Indians, winners of their fifth straight AL Central title. The Red Sox were underdogs, but knew they would be favorites in Pedro’s starts.

That thin hope last four innings, which is how long it took Pedro, leading 2-0, to leave the game with a pulled muscle in his back, just below the right shoulder blade. (Ugh.) Cleveland came back to win the game, 3-2, then cruised to an 11-1 victory the next day. Bret Saberhagen, the Red Sox Game 2 starter, had pitched quite well in 1999 around two trips to the disabled list, but was no match for the Indians wrecking crew.

Just when everyone in New England had given up, the Red Sox won the next two games in Boston. On Saturday, they backed (Pedro’s brother) Ramon Martinez (whose sore arm limited him to just four regular season games) with a six-run 7th and a 9-3 victory. That was just a warm-up for their 23-7 romp on Sunday, highlighted by 24 hits. Improbably, the series returned to Cleveland, knotted at two games apiece.

The Game 5 starters were a rematch of the Game 2 blowout: Charles Nagy and Bret Saberhagen, both pitching on three days rest. For the Indians, this was according to plan. For the Red Sox, this was an adjustment to Pedro’s injury.

In FOX’s pregame show, Steve Lyons questioned the “pulled muscle” diagnosis, suggesting that Pedro had actually injured his shoulder and should be shut down for the year. Alternatively, Keith Olbermann reported the Pedro had warmed up earlier in the day and might be able to pitch an inning or two if needed. Facing a team of All-Stars on their home turf, even this seemed hardly seemed enough.

Garciaparra, the Red Sox’ other superstar, got the Red Sox started by blasting a two-run homer to deep center in the first, but the Indians struck back with three in the bottom half (including a 477-foot bomb from Jim Thome) and two more in the second. Just like that, Saberhagen was done, and the Indians led 5-2. Derek Lowe, essentially the Red Sox only trustworthy reliever, had already pitched 6 1/3 innings in the series but was needed in the second inning.

The first huge moment of the contest came in the top of the third. The Red Sox scraped together a run and had runners on second and third with one out and Garciaparra at the plate. Suitably alarmed, Indians manager Mike Hargrove chose to walk the star to face the decidedly less alarming Troy O’Leary. Oddly enough, O’Leary hit Nagy’s first pitch, a high curve ball, over the right field wall for a grand slam and a 7-5 lead. To say the least, this was a shocking turn of events.

The Indians were so disheartened that they scored three run in the bottom of the third, including another monster Thome home run to deep center, to retake the lead. Right about the time Thome got back to the dugout, the television cameras provided us with the sight of Number 45 kicking the dirt in front of the bullpen mound.

“Pedro Martinez starts to loosen for the Red Sox,” Joe Buck intoned on the FOX telecast.

Lowe got through the third inning, though he was obviously spent.

The Red Sox got a John Valentin sacrifice fly in the top of the fourth, tying the game at 8. As the inning ended, Pedro Martinez, clad in his navy blue warmup jacket, took the long walk from the centerfield bullpen to the pitcher’s mound. How much he could approximate the Real Pedro was an open question.

It took Pedro a while to get going. He did not appear to have a good fastball early on (topping out at 91 in his first inning), and instead had to make due with his incredible curve ball and historic changeup.

The second huge moment of the game came in the bottom of the fifth, the game still tied. After Manny Ramirez drew a one-out walk, nearly getting hit in the head with the 2-1 pitch, Jim Thome, with two monster home runs in the game so far, strode to the plate. After falling behind 3-0, Pedro, seemingly oblivious to the gravity of the situation, got two called strikes and then blew Thome away with a middle-middle fastball for his first strikeout. A minute later he got Harold Baines for his second. For the first time, it dawned on everyone that the Real Pedro, not some desperate Hail Mary, was on the mound.

The game stayed 8-8 through six because Sean DePaula, pitching the game of his life but destined to be a footnote in the drama, matched Martinez with three hitless innings.

The Red Sox finally broke through in the top of the seventh. With a runner on second and one out, Hargrove once again elected to walk Garciaparra intentionally. After all, it worked so well the last time. Once again, O’Leary hit the first pitch over the right field wall for an 11-8 lead.

To be honest, the rest was just a coronation. As formidable as the Indians hitters were, no one believed anyone could score three runs off THIS Pedro Martinez.

They did not. In fact, they didn’t get a hit. Martinez finished up with six innings of no-hit baseball, striking out eight. The Red Sox tacked on another run in the ninth when the Indians finally decided to pitch to Garciaparra with a runner on second, and he drilled a double off the left field wall. Perhaps having proven his point, Hargrove then walked O’Leary.

The final was 12-8. Pedro Martinez, who we all thought was injured and unavailable, shut down one of the greatest offenses in baseball history in what was, at that point, the biggest game of his life.

The victorious Red Sox, bruised and battered as they were, advanced to the ALCS, where the World Champion Yankees were waiting.